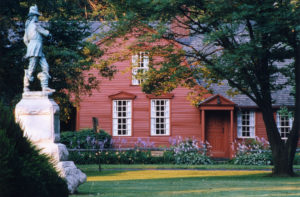 Growing recognition of the need for more inclusive and nuanced histories led the Town of Windsor to request that the State move the controversial John Mason statue to Windsor Historical Society (WHS). A $4,999 Quick Grant from CT Humanities will help interpret the statue at its new home.

Today, Major John Mason’s legacy is complicated and polarizing. While he was among the original settlers of Windsor, during the Pequot War, Mason also commanded the Connecticut forces in the expedition that massacred the Pequot nation, destroying their fort and village at Mystic, and in the subsequent attacks that effectively eliminated the Pequots as a recognizable nation.

At WHS, where the statue will be exhibited in its fully accessible outdoor courtyard, the public will experience a more balanced and inclusive interpretation of Major John Mason’s legacy, the events of the Pequot war, its effect on Connecticut’s Native peoples and the statue’s evolving symbolism.

Douglas R. Shipman, executive director at the Windsor Historical Society, said, “I’ve always appreciated the fact that CT Humanities has supported some of the most important cultural and historical initiatives in our state, and we are thrilled to have received a Quick Grant to help us interpret the John Mason statue as it moves to Windsor Historical Society. This grant will help us depict the important, nuanced and at times controversial stories of John Mason, the Pequot War and this region’s indigenous peoples, and develop a narrative that is inclusive, balanced and educational.”